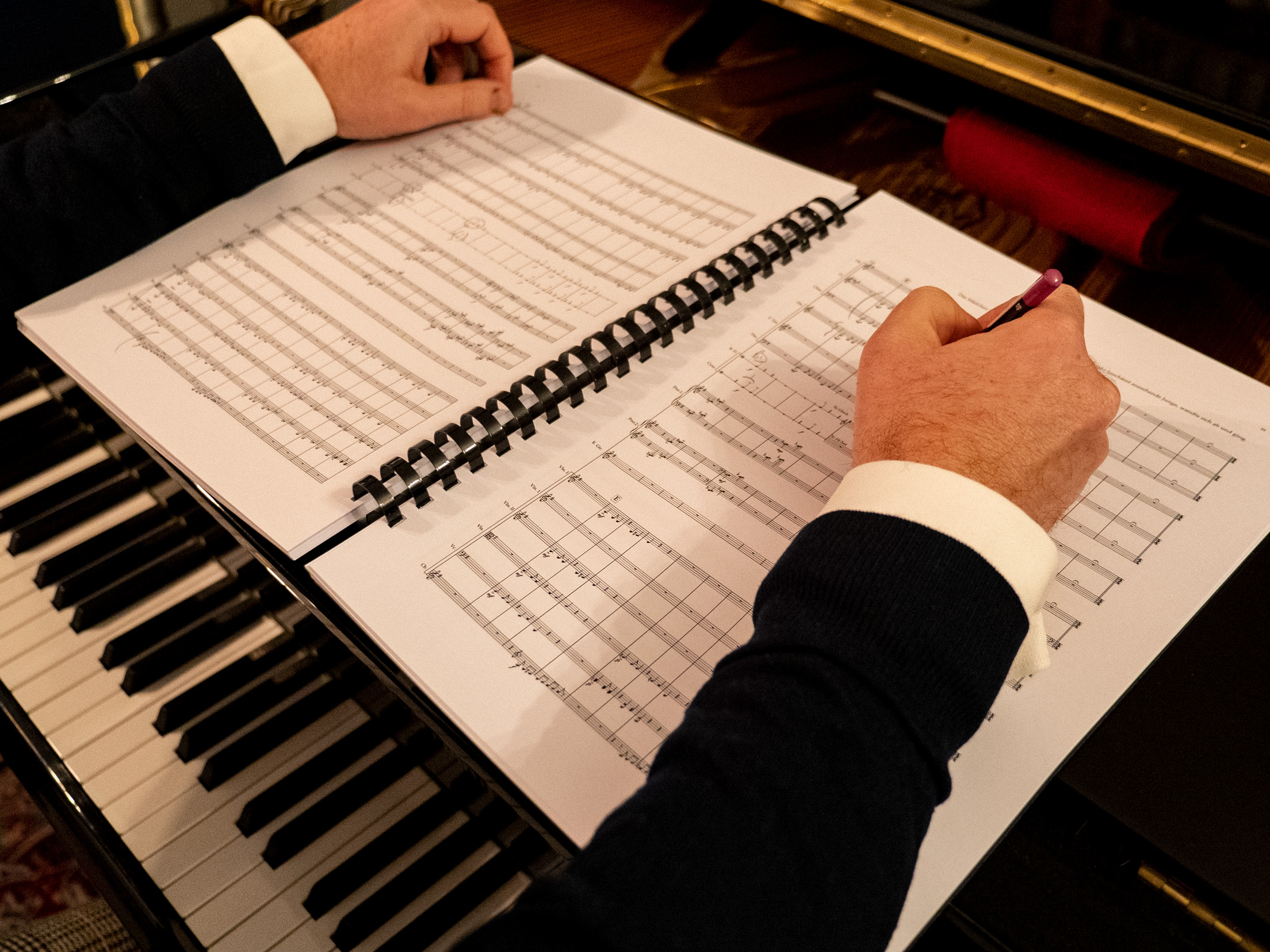 In the Autumn of 2017 I found myself drawn into a daily pattern where, instead of checking the News headlines, or my emails as previously, starting my morning by checking Twitter to see what the 45th President had written.  At some point in early Winter the thought sprang, unwanted, into my mind that some of Trump’s Tweets had a verse-like quality to them, and from this observation, the idea of setting them to music.

At the onset I had a guiding non-musical quality I was searching for, or better put, to find my own answer to a question many people around the world were asking. “How can one transform hate into love, fear into friendship, anger into laughter”.  “Resistance” was the word that captured many people’s imagination, however it is clear that, like Newton’s Second Law, opposing forces equal each other, or spiritually put, any aggressive force arouses and equal and opposite one. “You feed what you hate”.

The quality of Trump’s Tweets that I focused on was their extreme venom. They often seemed poisonous, and it was as if much of the world was infected by their disease, or infected by a need to provide the equal and opposite force to it. I approached the question by seeking not so much an anti-venom, but a way of transforming the text into something else.

My first compositional decision was an easy one – Trump should be a tenor, and here in Regensburg I had a tremendous colleague and friend (and American) Brent Damkier. Trump’s Tweets was written very specifically for Brent, who in addition to being a wonderful opera singer can also sing a variety of other musical styles and has a great feel for pop music.

The work begins with a setting of “I use social media, not because I like to, but because it is the only way to fight FAKE NEWS”. It struck me that saying “I use” makes its sound like you are referring to drugs, and indeed it seemed to me that Trump’s “use” of social media was pathological and addictive. I also wanted to musically allude to the daily process of Trump tweeting at 5am, and the world re-tweeting, answering, bots spreading the text etc. in an obsessive  kind of canon or fugue.

Along with Trump’s use of “the enemy of the people” his large collection of tweets mentioning “the Losers and Haters” and also “the Haters and Enemies” (and other variations) reminded me, and observed by many commentators, of Soviet Russia. For me this is a rather direct memory, having studied in Moscow in 1989-1990. Following his inauguration much of the Twitterverse had taken “Fuckface von Clownstick” to heart as a moniker for the new president and Trump’s use of the phrase in a tweet really brought home to me how much he wishes to keep the fire raging rather than wanting to win any particular battle. I took the liberty of slightly rewriting a series of “Losers and Haters” tweets to make them rhyme, and accompanied him with a banjo and fiddle.

One of my absolute favorite tweets is “No-one has more respect for women than Donald Trump”. On top of referring to himself in the third person it has a real verse-like quality to it and begs to be varied (No-one has more respect for Donald Trump than women etc.).  I set his “Access Hollywood” remarks as a counterpoint “Just grab ‘em by the pussy” and found the central word “respect” rather elegantly changes its meaning in the process.

Many people imagined the Trump campaign and presidency as a Pyramid scheme, and as the Mueller investigation continued and one felt the tension slowly building. The orchestral Interlude includes a fugue, which literally speaking means a “chase” and I imagined Trump running, setting off the various diversions at his disposal but being methodically hunted.

“I have never seen a fat person drinking diet coke” is an inspired tweet in its own right, but coming from someone who isn’t slim and apparently drinks around 8 cans of the stuff a day makes it exceptional. I wanted to set this tweet as a rap and made several sketches. I was also working on setting some text from one of Trump’s many speeches about THE WALL. I found the image of said wall one of Trump’s most venomous ideas and was searching for an appropriate anti-venom to contain it. Eventually I combined in my test tube the melody from Beethoven’s 9th Symphony (Schiller’s Ode to Joy), Emma Lazurus’ famous poem about the Statue of Liberty “A New Colossus” and “I have never seen a fat person” to counterbalance THE WALL and hopefully, transform it into something beautiful.

I decided early that Covfefe should be the closing number of my piece and imagined that a “Covfefe” was a latin dance like the “Macarena” or such like. One aspect of Trump’s presidency I wanted to capture was the shattering of norms and yet civil society continuing, cracks showing, but surprisingly still on its feet. I imagined my “Covfefe” as a Samba, where progressively I would throw opposing music into it and see how long it took to destroy it.  This movement has many tweets in it, as Trump’s tone becomes increasingly more hysterical and ALL CAPS. I took Haydn’s “Surpise” as a musical element for obvious reasons.

Trump’s Tweets has a great many musical quotations from other works. All are deliberate and all convey a non-musical meaning. In addition, there is a main motive, spelt out at the beginning of the work RE-SI, DO-LA followed by a cluster…that pervades the musical texture on many occasions.

Trump’s Tweets wasn’t a commission, but Theater Regensburg programmed it for a Symphony Concert on April 1, 2019 where it received its premiere with Brent Damkier singing Trump and the Regensburg Philharmonic Orchestra and Choir in Neuhausaal in Theater Regensburg. With its excessive percussion and electronic instruments, combined with the large orchestra the result was rather deafening, leading to the Intendant insisting we cancelled “Covfefe”. In its place we performed Crybaby, however in performance, due to the hysterical reaction from the audience, we then performed “Covfefe” as an encore.

The Carnival of the Dinosaurs Text En